Update II Credit to the central government rose to 1,259.1 billion rupees in June, up 24.6 percent from a year earlier, picking up pace from 19.3 percent in May. Borrowings from local currency books rose to 883.3 billion rupees, up from 845.7 billion rupees. 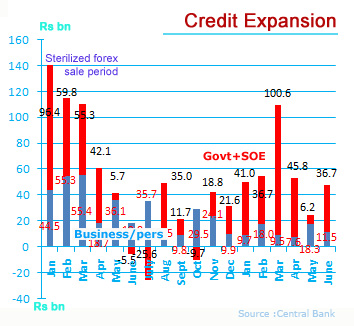 Credit to state enterprises rose to 338.9 billion rupees up 5.7 billion rupees from May but June also saw some currency depreciation and two thirds of SOE credit is forex denominated.

SOE credit was up 23 percent in June from a year earlier, slowing from 24.9 percent a month earlier.