Feb 21, 2013 (LBO) – United Motors Plc, agents for Mitsubishi in Sri Lanka launched a 1.2 litre engined Mirage car into an auto market that has been dented by a tax-hike, high interest rates and currency depreciation. “We are not very ambitious with the current taxation and where the yen is,” managing director Chanaka Yatawara told LBO.

“The yen is still strong though it has weakened a little bit. So we hope to sell about 150 to 175 units a year.” 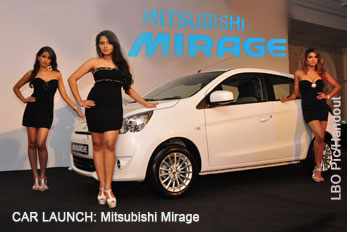 Registrations of small Maruti/Suzuki cars plunged to 190 in January 2013 from 1,213 a year earlier. But luxury BMW registrations soared 280 percent in the same month, which industry analysts say has been imported with tax-slashed permit given to state workers.

The Mitsubishi Mirage, hatchback which promises 21 kilometres a litre under test conditions and at least 15 kilometres in Sri Lankan driving conditions is priced at 3.5 million rupees.