COLOMBO, August 8, 2013 (AFP) – A statue of Queen Victoria which was banished from Sri Lanka’s presidential palace amid fears it brought bad luck will now be spruced up for an upcoming Commonwealth summit. The 1897 statue of the former British monarch seated on a throne had been banished from the palace a few years ago and dumped in the backyard of Colombo’s museum.

Museum superintendent Ranjith Hewage said the museum now planned to shift the statue to a better location so that it faced the main road as well as a public park, which was until recently named after her. 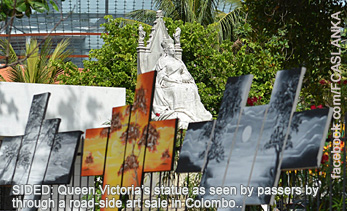 “We will turn the statue from its present location to face the road,” Hewage told AFP.

“It will be done before the CHOGM (Commonwealth Heads of Government Meeting).”

He said the statue that marked Queen Victoria’s diamond jubilee was moved from its original location to make way for “improvements” at the palace, the official residence of Sri Lanka’s heads of state since independence from Britain in 1948.

However, official sources said the move was due to a superstit