Dec 13, 2011 (LBO) – Sri Lanka’s state-owned Bank of Ceylon (BOC) has signed a deal with Dubai’s Mashreq Bank for a 140 million US dollar syndicated loan facility, a statement said. Mashreq, one of the top financial institutions in the United Arab Emirates, has a strong franchise in loan syndication anchoring the transaction with 10 banks including Sohar Bank, Doha Bank, The ARAB Investment Company SAA-Wholesale Bank (Branch). “The purpose of the syndication is to utilize the proceeds to fulfill the short term funding requirements and trade finance related needs of BOC,” it said. 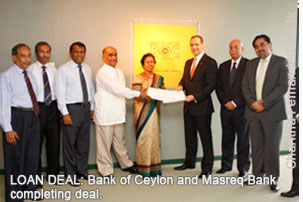 This was the second such facility arranged by Mashreq Bank for BOC this year, coming after the syndicated loan facility of 175 million dollars arranged in April 2011.

“Both these transactions were substantially oversubscribed,” the statement said.

Bank of Ceylon, whose rating outlook was lifted to AA+ (lka)/ Stable by Fitch Ratings Lanka, had asset base of 779 billion rupees by September 2011.