July 4, 2014 (LBO) – Sri Lanka’s police acquired its largest fleet of high-speed patrol motorcycles this week, but even before they could be unleashed to tame errant motorists, traffic police demonstrated their skills in… err running. Hopefully, there will be very little wear and tear because there aren’t many roads where a Yamaha 600 cc can shift from the second gear to the third, except on the two expressways where motorcycles are not allowed.

Click below to read more stories by our Paradise Isle correspondent. At a highly publicised ceremony, the aggressive Yamaha machines were to be distributed after a picture-perfect formation of man and machine, but a monsoon shower saw constables bolting and leaving the police Inspector-General high and dry.

The constables who received the machines, costing a whopping three million rupees each, wore peak caps rather than helmets suggesting that they may not ride the beasts at all, but keep them for show and scare law-breaking motorists. 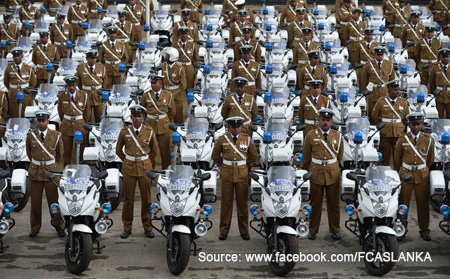 “There is a good reason for a traffic constable not to ride a bike this expensive,” explained a senior police officer. “In the event of an accident, the rider must pay the damages because police vehicles are not insured.”

A constable who totals his brand-new Yamaha 600 cc machine will take 17 years and six months to make good the loss even if he puts aside his entire 14,280-rupee basic monthly salary towards repayments. But there is a brighter side.

The heavy repayment should be an incentive for the traffic constable to book more motorists, earn more revenue for the state by way of fines and claim rewards for good work.

Inspector General N. K. Illangakoon announced in January 2012 that he was doubling the reward money for traffic constables, but so far the suggestion does not appear to have made roads safer. This could change with the new bikes.

The fear of replacing a 600 cc Yamaha or paying for even a small dent should encourage constables to work harder and earn more rewards, just in case they have a toss and damage a fender or a lamp.

A fall from the heavy bike could cost more than an arm and a leg and that is why many constables did not wear riding helmets at Tuesday’s ceremony although they came from Point Pedro and Dondra to claim their motorcycles.

Inspector General Illangakoon may have felt disappointed when his men hooked it leaving the bikes in the rain, but the display of athletic skills in quick retreats could be an asset, especially for traffic cops.

In fact, lives could be saved if the running streak of cops could be further improved. A traffic constable who was not nimble enough to flee was recently shot dead when he flagged down a van in Kurunegala.

Another from the Southern Expressway was the victim of a vicious assault because he failed the running test administered by a politician.

The entire country could get the runs when they have to pay LKR 945 million for 315 bikes.