Apr 09, 2019 (LBO) – The Thomson Reuters Foundation has responded to The Planters’ Association of Ceylon (PA) statement published on www.lankabusinessonline.lk on 2nd April which claimed that the Reuters article titled ‘Tea Label Giants Vow Probe after Sri Lanka Labour expose’ on tea estates were false.
Kieran Guilbart, the Thomson Reuters Foundation commissioning editor, has countered each point made in the PA statement with documentation to back up the original allegations.

Last week the Planters’ Association issued a media statement rejecting allegations made in the article written by freelance journalist Lisa Fuller and published by Thomson Reuters Foundation recently. The statement particularly stressed that allegations regarding wages, working conditions and the health and wellbeing of workers were “totally false”.

We reproduce the latest Reuters statement in full below:

Lisa sought responses from the estate managers who are your RPC members’ management employees- which means we sought comment from managers at all four relevant constituent members and quoted three of them. For example, Indra Gallearachi, the Deputy Manager of Robgill Estate who we quoted, is part of the management team for Kelani Planations (an RPC/constituent member) according to their 2017-18 annual report.

The Brunswick Estate Manager referred Lisa to Maskeliya Plantations central management in Colombo, and she made 8 phone calls on March 12th seeking an interview with them, but they failed to respond.

None of PA’s RPC members referred us to the Planters Association for comment.

“Illegal wage deductions have been made from worker salaries that amount to cuts of as much as 87% of wages is a demonstrably false allegation.” 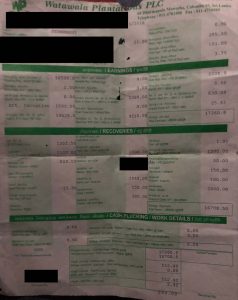 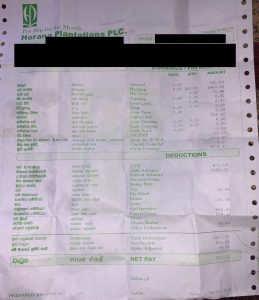 “Slashing wages by more than three-quarters is illegal. In truth, deductions above 50% are a violation of the law.”

Section 4 of the Allowances for Plantation Workers Act applies to the Wages Ordinance Act to dictate that the ceiling for deductions for plantation workers is 75%, not 50%.

“17 wage slips examined by the author showed workers taking home an average pay of US$ 1.54 (approx. Rs. 270.2) daily “after debt repayments, salary advances and fees” is a demonstrably false allegation.”

This policy is not related to the wage scheme or any other provisions in the previous or current collective agreement and your response suggests that you misunderstand the findings.

Workers reported and showed documentation that substantiated that on days that they failed to meet quota they were recorded as working for only a half day, when in fact they had worked for a full day.

The policy was consistent across all estates, though the quota did vary at some estates. At one estate, an estate manager told Lisa that the fact that his quota was 15 kilograms showed that he offered workers a good package.

Tambiah Eliyathamby did file a legal petition on behalf of the People’s Workers Union claiming that halving wages for failing to meet quota was a violation of the CBA (please find attached). The case was thrown out before it was heard because his union was not one of the signatories to the CBA, but it substantiates that our reporting is not based on a misunderstanding of the wage structure. This also contradicts your statement that no unions have ever challenged the policy.

This was a quote from the Minister of Plantations, Navin Dissanayake, not an assertion by Lisa or the Thomson Reuters Foundation. A 2018 interagency UN report on Sustainable Development Goals and Sri Lanka’s 2016 Demographic and Health Survey, back up his quotes.

1) From the article: “Several laborers also complained that their estates only abided by the certifiers’ ethical standards during audits but they were afraid of reprisals if they revealed this to auditors.” This assertion is not from Lisa or the Thomson Reuters Foundation, but the workers who were interviewed by Lisa.

2) The Thomson Reuters Foundation provided a response from an estate manager who said that certification standards were always implemented.

3) Lisa has pictures that shows that several guidelines are being violated, including waste separation, water pollution, and failure to delineate a 10 meter buffer zone from water sources.

We never made such an allegation. The quote in the article is:

“Normally we don’t wear the protective gear when we spray chemicals, but on the day that Fairtrade comes, the manager tells us we have to,”

Most workers said protective gear is always available to them, but they don’t usually wear it because it is so unwieldy that it makes their jobs nearly impossible. As the quote says, the manager only tells the workers they “have to” wear it during audits.

“RPCs themselves too have managed healthcare for employees, particularly in relation to antenatal and post-natal care through an organized Mid-wife programme across the estates while maintaining their own dispensaries, maternity wards and hospitals to treat estate workers.”

All of the estates had dispensaries, staffed only by pharmacists, with very limited medication available, and often were only open a few hours a day. For any serious illness or injury, workers had to go to hospitals outside of the estate.

“Every citizen of Sri Lanka has equal entitlement to free healthcare at any Government hospital. “

2) the worker couldn’t afford medication, which was not available for free.

“Transport, and ambulance services are also provided free of charge to take patients to the nearest hospital in all RPC estates. “

Workers at multiple estates said they struggled to pay for transportation to hospitals. None mentioned transportation provided by the estates, with one exception, who said that she occasionally provided a ride on estate vehicles who were already going into town on an informal basis.

“In the event of deaths material, monetary and labour assistance as funeral aid is also provided free of charge…sanitation, housing, water supply, social services, sports, welfare, community and support services religious places maintenance and many other facilities and amenities are provided free of charge.”

These items are often funded by deductions from workers salaries- even though the CBA does stipulate that the estates have to provide some of these services for free. To be specific: