Apr 25, 2013 (LBO) – A 43 kilometre stretch of Sri Lanka’s Northern Railway line has been re-built to allow trains to be run up to a speed of 120 kilometres, Ircon, an Indian state-run transport engineering firm said. Ircon said the 120 kilometre speed capable track has been laid with pre-stressed concrete sleepers and rail joints have been minimized welded rails with switch expansion joints.

Manganese steel crossings, and flash butt welding and panel interlocking technology has been used which will minimize maintenance, the company said.

Railways in Sri Lanka’s north use to operate to Mannar in the north west and Jaffna.

India is funding the rebuilding of 252 kilometres of rail track, which had been destroyed during a 30-year war through an 800 million US dollar credit line. 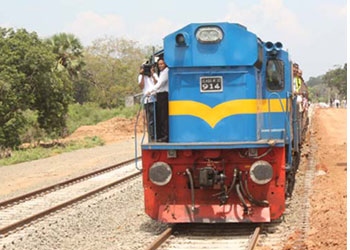 On April 24, a 43 kilometre stretch running from Madawachchiya to Madhu Road station was tested by a trial run, Ircon said in a statement.