July 21, 2014 (LBO) – Sri Lanka’s loans to private business from commercial banks slipped 7.9 billion rupees in May 2014 from a year earlier while credit to the state and state enterprises also contracted, official data shows. Private credit has contracted in four out of five months this year and is down 60 billion rupees from December, largely on account of contractions in gold-backed loan books, where there were defaults.

The Central Bank has said that loans to industry and services were strong. Total loans were up 2.2 percent to 2473.7 billion rupees from a year earlier, despite the contraction in pawning loans.

Sri Lanka’s economy has however been picking up, according to official data, despite the credit contraction while some companies de-leverage and strengthen their balance sheet.

Domestic consumption has been weak following a blow dealt by steep currency depreciation in 2012, which has not been allowed to reverse despite weak credit. 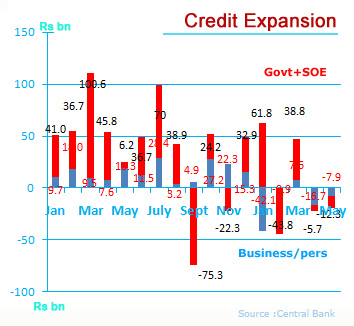 Credit to the central government was down 11.5 billion rupees in May from a month earlier t