Feb 19, 2013 (LBO) – Sri Lanka has begun re-building a colonial era canal north of the capital Colombo as an eco tourism attraction due to its access to nearby wetlands, the island’s economic development ministry said. A 600 million rupee project to rebuild the canal banks, clear silt and spruce up the surroundings had been inaugurated on Sunday February 17 by economic development minister Basil Rajapaksa. 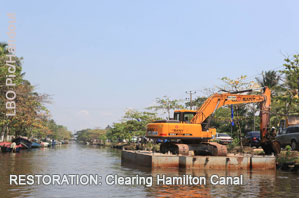 The Canal in its present form had been completed in 1802 by the then British Revenue and Commerce Agent Garvin Hamilton.

The canal system had its origins during 15 century reign of King Vira Prakramabahu III, when the when Negombo lagood was a seaport for trading cinnamon and other commodities, the economic development ministry said.

The project covers 22 kilometers from Ma Oya to the mouth of the Kelani River, which is part of a plan drawn by Sri Lanka’s Moratuwa University to develop tourism in the negambo.

The Dutch improved upon it and is presently called the Dutch canal, lin