Nov 11, 2010 (LBO) – Parts of Sri Lanka’s capital Colombo went under water as unprecedented rains lashed the island, and authorities warned residents to use public transport to avoid traffic jams amid flood warnings in other parts of the country. Many of Colombo’s streets, including the approach roads to Sri Lanka’s parliament was impassable as water levels rose. 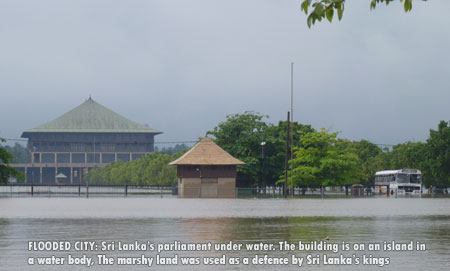 The ground floor of the structure built on an island in a fresh water body was under one foot of water, officials said.

The meteorological office said the capital had been inundated with an unusual 400 millimetres of rains as ceaseless rain lashed the country overnight.

Authorities warned residents in the capital not to drive cars but to use public transport to reach their workplaces to avoid more traffic jams.

Many of the by roads in the capital were also flooded marooning residents. Radio talkshow hosts relayed messages from listeners trapped in traffic jams and trains in the capital. 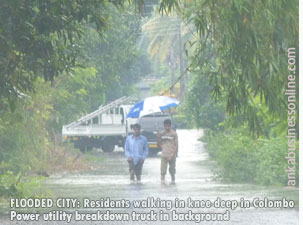 Parts of the city was also hit by power outages.

The meteorological office said outside Colombo, Kurunegala in the n