Nov 11, 2012 (LBO) – Sri Lanka’s health ministry has put off till March 2013, graphic labeling designed to educate consumers on the cancer and heart disease causing effects of cigarette smoke. Sri Lanka’s Ceylon Tobaccco Company, a unit of British American Tobacco, went to courts against the new rules which gave three months for the firm to comply.

The firm said in a stock exchange filing that after initially delaying the implementation till the next hearing date of November 22, a new date has been set by gazette.

Sri Lanka proposed graphic labeling containing a hospitalized patients and graphic images of several types of cancer in rules issued in August through a government gazette. 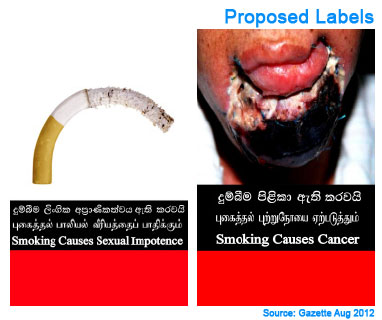 Ciggarette smoke is believed to be among the main causes of non-communicable diseases, including cancer, circulatory diseases and emphysema.

Circulatory problems arising from smoking is also suspected to contribute to male impotence.

Rather than the addictive narcotic nicotine, the active ingredients in cigarettes (which is fatal only in a large dose and has been used as an insecticide), researcher