May 26, 2014 (LBO) We believe that micro enterprises are important. If they succeed, they become small businesses and then medium enterprises. That is how development happens. We wanted to find out how poor micro enterprises were served by mobile companies and by electricity distribution companies. LIRNEasia conducted random-sample surveys in three countries (actually in strong cities and weak cities in Bangladesh, India and Sri Lanka). The sample was 3,180 micro enterprises (defined as employing 0-9 persons) from the lower SEC classifications. In addition, qualitative research was also conducted.

What they use and what they pay 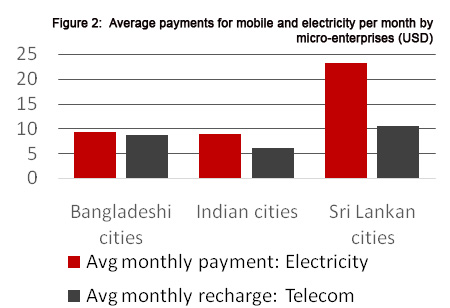 Yet, they experienced outages and voltage fluctuations. 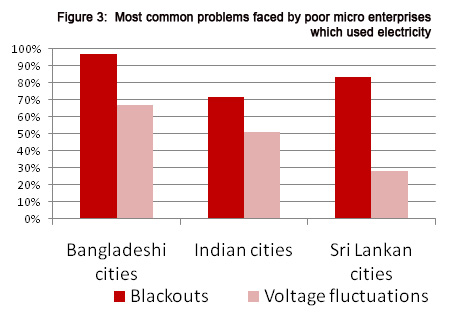 Yet, they did not complain that much. 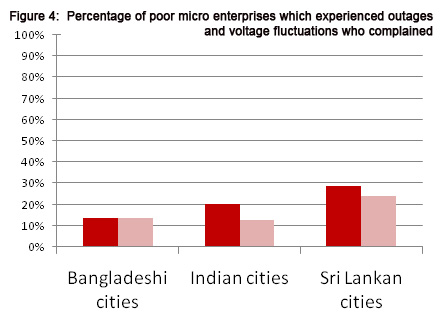 What this shows is that while micro enterprises (and others) in Sri Lanka pay a lot more for electricity than their counterparts in Bangladesh and India, they do not have to bear the costs of backup equipment that is essential in the other countries where there is no commitment to 24/7 supply. This is a clear benefit of Sri Lankaâ€™s no-load-shedding policy.

Reliable supply is reported as being essentialby all micro enterprises. 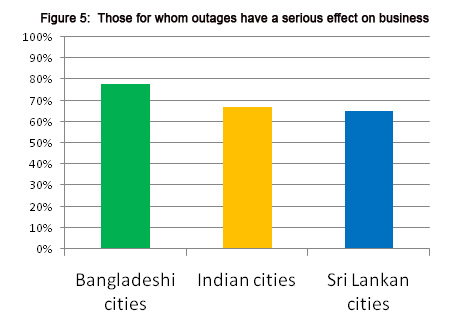 Close to 60 percent of Sri Lankan respondents reported that they do not receive advance notice of outages. Of those who do, over 60 percent were informed over TV or radio in Colombo. For the respondents in Wayamba, the public announcements made by the CEB were the main source of information.

What can be done

Outages are a serious problem for those who run micro enterprises. One person we interviewed, a young woman who operated a beauty parlor, said that she could not offer her services without power. That meant lost revenue. If she knew of a planned outage, she could reschedule her clients. Even with an unplanned outage, if she was quickly informed of the when service was likely to be restored she could use her phone to reschedule clients and minimize the disruption to their lives and to her business.

The supplier does not know how big a problem outages are, because most customers are fatalistic about them and do not complain. In addition, the mechanisms in place to receive complaints are imperfect. Call centers are in place only in some areas, so it is necessary to remember long number strings. Since an outage affects many at the same time, the CEB or LECO number tends to be busy when people call. It has also been recorded that after the first few calls come in, the staff give priority to fixing the problem, sometimes leaving the phone off-hook.

The solution involves the use of the ubiquitous mobile phone. In addition to the conventional methods of public and media announcements, we proposed to CEB and LECO that they send out SMSes. Unlike the other methods, SMSes are effective even for unplanned outages. If the SMS can include information on when service is likely to be restored, people will not keep dialing the regional office or the call center, but will use that information to rearrange their schedules.

The main lesson we take from our survey is that CEB and LECO should give the highest priority to ensuring uninterrupted power supply. Our people pay more than double what their neighbors across the water pay. They deserve uninterrupted supply. But some outages are inevitable. What we propose is that their negative effects be minimized using the potential of the mobile phone.

There is no objection, in principle, on the part of CEB and LECO. Their response is that not all their customers give them their mobile numbers. We suggest that the process be made as simple as possible, for example, allowing the number to be sent in the form of a SMS. Procedures such as filling up forms are too cumbersome.

The companies must effectively market the service, communicating with the five million or so customers they have with attractive and informative leaflets that can be handed over along with the bill. These messages must provide assurances that the phone numbers will be used only for purposes directly related to improving electricity service and will not be used for any other purpose. Some media publicity would also be useful to reinforce the message.