May 03, 2014 (LBO) – Sri Lanka’s inflation in the 12-months to April was measured at 3.5 percent, lower than the 4.9 percent shown by the official index compiled by the state statistics office. The CAL UPI Index, compiled by CAL Research, an equities research firm has shown slightly lower than official inflation since December 2013.

Bu the index showed much higher inflation as much as 15 to 20 percent in first quarter of 2013 after the rupee depreciated from around 110 to 130 during the period.

8 percent during the period. 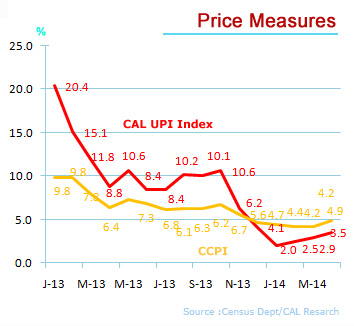 In the 16 months from January 2013 to April 2014 the CAL UPI Index showed inflation of 25.6 percent compared to 15.2 percent by the official Colombo Consumer Price Index.

Analysts say an index that has lower weight in traded goods may show lower inflation in a time of rapid exchange rate depreciation, but will catch up later as non-traded items adjust with time.