Jan 07, 2014 (LBO) – Sri Lanka’s Securities and Exchange Commission says, not only the private sector but also State owned Enterprises (SOEs) should be listed on the Colombo Stock Exchange, in order to achieve its USD 100bn market capitalization target by 2020.

Also the general public has a right to know what is happening inside these organizations and how effectively they are managed,”

This is where listing could become meaningful.

He said that listing an SOE on the stock exchange should not be interpreted as “privatization.”

“One must understand that listing an SOE doesn’t mean privatization. Privatization means handing over of the majority ownership and the management of an SOE to the private sector. Listing has no such prerequisite.

The public float requirement of a Main Board company is only 20 percent and 10 percent for Diri Savi Board, the second board of the exchange.

Godahewa said partial listing of commercially oriented SOEs would help these entities to raise additional capital required for expansion without burdening the Treasury.

It would help in the growth of the share market, whilst allowing the investing public to benefit directly from the enhanced value creation of the SOEs, Godahewa said.

He said the corporate governance within these SOEs would improve significantly as their managements would be subject to the stringent discloser requirements of the capital market.

Therefore, an SOE can be listed by releasing only 10-25 percent of shares to the market. By doing so government doesn’t lose control of the listed SOE. 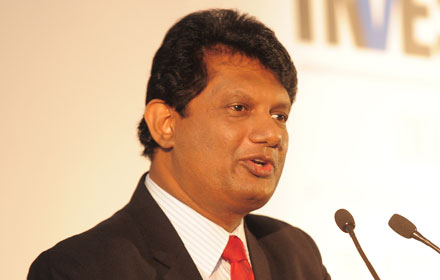 “We expect not only the private sector companies but also some State owned enterprises to be listed during this period,” Chairman of the SEC Nalaka Godahewa said.

“We hope to see about USD 7. 5 billion being raised through the capital market over the next six years- which will add another USD 30 billion in market capitalization.”

“For example according to the requirements of the Insurance Act , the Sri Lanka Insurance Corporation needs to be listed by 2016.”

However, he said not all the State Owned Enterprises could be listed due to social roles some them play, but commercial ventures those belonged to the government, which compete with private sector companies, could be listed in order to secure level playing field.

“There are several other entities, which are also being considered for listing. But we must accept the reality that not all SOEs could be listed because many have a social role to perform within the overall economy,” Godahewa said.

“Such institutes must always be under 100 percent government ownership as they cannot be profit oriented,”