Aug 20, 2012 HANOI, Vietnam (LBO) – Tourism between Sri Lanka and Vietnam which is just beginning has a strong potential to grow in the future, officials said during a familiarization tour of the county by travel agents of the Indian Ocean Island. Senior representatives of 15 travel agents from Sri Lanka were on a familiazation tour of Vietnam’s capital Hanoi, Halong Bay and Hue ancient city, Da Nang in the centre, My Tho in the Mekong delta and the bustling Ho Chi Minh City in the south.

“You will be the bridge to link the peoples of our two countries,” Nguyen T Phoung Mai, general director of Hanoi Toserco, a state run travel services firm started in 1988 to the
Delegation. 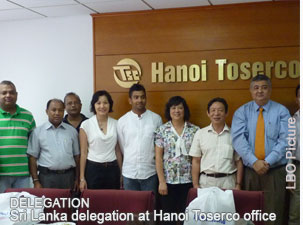 She was addressing the delegation from Sri Lanka was headed by deputy head of the Vietnam embassy in Colombo Phung Trong Tuan and Roland Gunesekere head of Sri Lanka’s Safeway Travels at Toserco’s head office in Hanoi during the first leg of the tour.

“I think when we get back we will be able to give a better picture about Vietnam to Sri Lanka,” Gunesekera told the meeting.