Feb 06, 2013 (LBO) – Sri Lanka’s Deccan Aviation Lanka said it had been re-named Millenium Airlines Ltd, and will operate under the brand ‘Simplifly’. The firm operates a Bell Jet Ranger helicopter, a GippsAero GA8 Airvan, a Cessna 206 amphibian and says it plans to bring in a Bell 407 VIP transport. 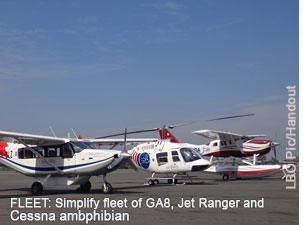 The firm was founded by Sri Lanka’s Favourite group and India’s Deccan Aviation. The Indian partner sold its 48 percent stake to Millenium Aero, a Singapore based firm in November 2011.

With the corporate name change, the airline has now completed its transition to reflect its new ownership, and its new vision for the future of internal air transport in Sri Lanka,¦ vice chairman Suren Mirchandani, said in a statement.

The company operates helicopters to all parts of the country and flies to all local airports. Simplifly also manages aircraft on behalf of corporate owners.