July 18, 2013 (LBO) – The Household Income and Expenditure Survey (HIES) is my favorite among all the surveys done by the government.

Where else do you get information as granular as how much Kelawalla fish people buy?
Given the ICT Agency’s stated commitment to open data, I was expecting data in Excel at least, sadly, not so. And the first results are partial. No Kelawalla prices. Just whatever they thought would be of interest.

Before I got my teeth into it, I got a call asking for my views. Could not fully answer right then. But here goes.

It is wrong to claim, as journalists have, that mean household expenditure is now higher than mean household income. That can only happen if all households are run like the government.

It is true that household expenditures appear to have increased more rapidly than household incomes. But, even here, I advise caution. Income is notoriously difficult to ascertain. First, people with irregular income (most of us) have trouble giving an accurate number. Second, people have reasons to over-/under-state income.

Third, errors are introduced in moving from individual income to household income. Last time I wrote about the HIES data, I had not even mentioned income data.

So what has happened, if you take both sets of numbers to be equally credible, is that household expenditure increased at a slightly faster pace than household income. That suggests that Sri Lanka’s already low saving rate has declined even further, but not much else. I happen to believe that expenditure numbers are a lot more credible than income numbers, so I do not place much weight on a few percentage points here or there.

After declining from a high of 64.6 percent in 1990-91 to 37.6 in 2006-07, the proportion spent on food increased in the three years prior to the latest household survey by a significant 4.7 percent. Not only that, but a similar 4.6 percent increase has occurred in expenditure on rice as a percent of total food expenditures. Not only are we going counter to Engel’s Law, but we are also going against its corollary which says there should be a shift from carbohydrates to protein within the food budget. Taken alone, these numbers could be interpreted as a rise in poverty.

I cannot replicate that analysis at this time because DCS does not report protein expenditures in its teaser report (only Dhal is reported.Some kind of vegetarian bias?). It does present some food consumption data, but per-capita and not at household level (I guess someone forgot that the survey is a Household Survey).

I’d rather work with household numbers consistently, but what to do? 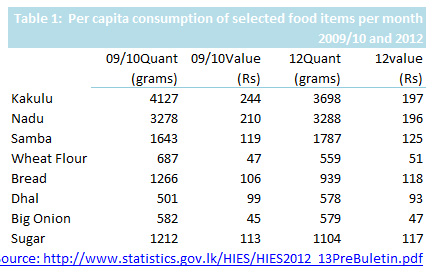 Decreases in consumption have occurred in Kakulu rice (429 grams), wheat flour (128 grams), bread (327 grams) and sugar (108 grams). Consumption of Samba rice has increased by 144 grams and dhal by 71 grams. Even though the sample is large (25,000 households across the country), there still is a margin of error so I disregard small changes.

Let’s start with sugar. A nine per cent decrease in sugar consumption. Is this something to worry about? Or is this just better nutrition by an aging population? I think the latter but am open to discussion.

A 10 percent decrease in Kakulu consumption, with Nadu remaining constant and Samba increasing by 9 per cent. Overall, people are eating less rice. Is this a bad thing, for a population increasingly suffering from lifestyle diseases caused, among other things, by over-consumption of rice?

There is a move to the more expensive and high-status Samba that does not quite fit the health narrative. The move away from bread and wheat flour should make the government happy, though I would like to see the district-wise distribution given wheat preference is strongest amongst the plantation workers.

The preliminary results do not allow strong conclusions to be drawn. No evidence of a population rapidly moving to middle-income prosperity. No evidence either of immiseration. Have to wait for the protein data. And maybe the data on household assets, which I used last time Poverty: Where should Sri Lanka focus resources.

There seems to be something fishy about the food ratio, but that is a problem that started in 2009/10. I keep hoping someone will start digging into that.

If there is nothing wrong with the food data, it appears that people are spending more on non-food items like personal care and health and saving less. More on that when more data is available.