November 22, 2006 (LBO) – The Colombo-Habarana Road is a military supply route. Those driving on it are likely to come across slow moving convoys of army containers guarded by soldiers going North and buses carrying soldiers and sailors going South on home leave.

Yet, the recent rains washed away parts of this road between Alawwa and Kurunegala. It is obviously not a military supply route that is in the best shape. 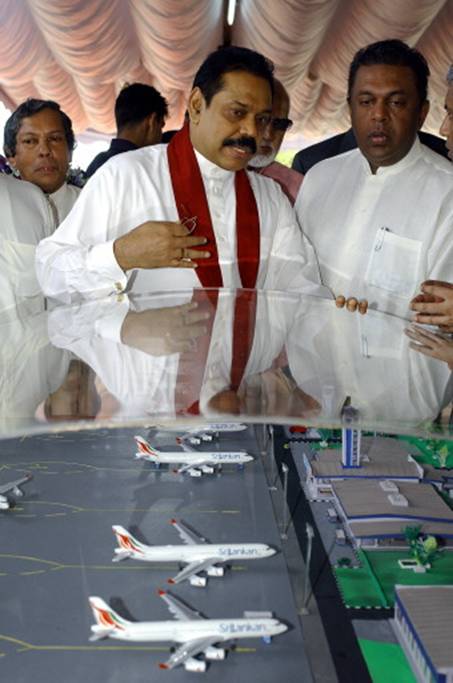 Sri Lankan President
Mahinda Rajapakse looks at a model of the second international airport
of the island to be built at Weerawila in southern Sri Lanka. Rajapakse
laid the foundation stone for a 125-million-dollar, 4,000-metre
(13,200-feet) upgrade to a small airport at Weerawila, which is to
become an international terminal by November 2009. Rajapakse marked his
first year in office by launching work on a new international airport to
handle the giant Airbus A380 airliner and pledging a major new port.Â
(AFP PHOTO/Sanka Vidanagama)

A war has been going on in the North and the East for over 20 years. But we have not built a high-quality highway to supply the front. Instead, the most progress has been made in building the Southern Highway and building dams to prevent the rainwater in the Seeduwa area flowing to the sea (this is also known as the Katunayake expressway).

The one-year anniversary of President Rajapaksa’s razor-thin victory in 2005 was celebrated in grand style in Weerawila in the Deep South of the country. The foundation stone was laid for the long overdue alternative international airport.

Yet, from 2007, the only runway that can allow Kfirs of the Sri Lanka Air Force to land and take off is going to be closed for eight hours every day to allow for resurfacing, ensuring the LTTE a guaranteed eight hour respite from the air war, among other things.

This also happens to be the only runway in the only working international airport this country has.

Is there anything wrong with these pictures?

As peace-loving infrastructure wonks, we don’t like to admit this too loudly, but most infrastructures have military applications. 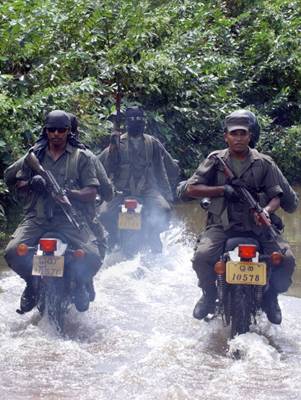 A Sri Lanka army special motorcycle unit soldiers conduct a patrol through a flooded
street in the capital Colombo. Heavy monsoon rains have flooded several
parts of the island and caused the deaths of 45 people in three weeks,
according to the Natural Disaster Management Centre. (AFP)

The Roman Empire was defined by its roads; where the road ended, there ended the empire. “The Empire on which the Sun Never Sets” was held together by the “All Red Line,” a system of undersea and overland cables that was completed in 1902.

The Kandyan kings threatened to behead anyone who built roads; the British went on a road-building frenzy after they barely managed to beat back the Great Rebellion of 1818.

The kings as well as their British successors knew that roads allowed troop movements and enabled easy supply of the front. After roads crisscrossed the former Kandyan Kingdom, there were no rebellions of consequence.

When President Eisenhower was a young officer in the US Army, he spent 62 days on a military convoy trying to get to the West Coast from Washington DC. One of the greatest achievements of his presidency was the construction of the “National System of Interstate and Defense Highways” [note the name]. Now the full length of the United States can be traversed by car in a few days.

If such a highway connected Colombo to the North and East, the sailors who were massacred by the LTTE suicide bomber at Digampatana would still probably be alive. There would have been no need to park on the side of the road on a two hour drive; and no side to park on anyway.

Good roads are not, of course, solely of strategic value. They have enormous social and economic benefits. But most of the world’s major highways and railways got built because the economic and strategic rationales converged.

The mystery is why that did not happen in Sri Lanka, and why the only decent highway that is being built after Independence is going South, away from the theater of war.

Many decried the successful LTTE raid on the Katunayake International Airport as a despicable terrorist attack. The trouble was that it did not meet the criteria of a terrorist attack: it hit a military target.Forced air

The destruction of half the SriLankan fleet and the driving up of war risk insurance, etc. were collateral benefits the LTTE gained by attacking the principal military airfield in the country.

It has been five years since that nadir of the war was traversed. One would think that some action would have been taken to separate the military airfield from the only international airport this export- and tourism-dependent country has.

But, no. We are building the alternative airport from scratch as far away from population agglomerations and the theater of war as possible, in the President’s home district in the Deep South.

There is a working airfield in Hingurakgoda, which meets the key criteria one looks for in an alternative airport: it enjoys drier weather than Katunayake; it is in a different weather zone. And it is most likely that the runway can be upgraded to handle Airbuses and Boeings once in a blue moon (which is all that is needed from an alternative airport) much faster than Weerawila can be constructed from scratch.

It also has certain other advantages that should not be spoken of too loudly. Hingurakgoda is the location that has long been discussed as the logical headquarters of the Sri Lanka Air Force.

And it doesn’t take a rocket scientist to figure that it would be a little more effective for running sorties over Kili than Katunayake. And if the airport gets done sooner, the shorter will be the Kfir holiday for Soosai.

Why? Why do the economic and strategic not converge, like it does everywhere else, to give us decent infrastructure in this blessed island?

It is possible, but naive, to think that we are not building a highway to the North and East because of the evil conspiracies of the foreigners who want to break up this blessed island.

Roads and highways are the conspiracy.

After all, it was the ADB, which is financing part of the Southern Highway, that pulled out all the stops to rebuild the A9 road during the ceasefire. Obviously a bad thing to do: rebuilding the road that reconnected Jaffna to the rest of the country is a frontal assault on the unitary state.

The very fact that the present government is keeping A9 closed is proof that connecting Jaffna to the rest of the country is an evil separatist plot. We’ll really bury this separatism when we stop the conspiratorial air and sea transport to Jaffna.

The phones have already been shut down and the postal service is not working, even when it’s not inundated with food parcels; cut all communications with Jaffna and separatism will be buried for good.

Our leaders have deep strategic reasons for not building highways to the North and airports in the Northeast; the same kinds of reasons they have for cutting off communications with Jaffna.

If we actually have decent highways connecting the North and East to the rest of the country, we will foster separatism. The reason we have crappy roads that take us three and half hours to cover 100 km on a good day and take us to the mortuary and the emergency ward on a bad day, is part of a great and good plan to safeguard the unitary state.

If we can’t go to Jaffna, it’s bad for the Tigers (and bad for Solheim too). The harder it is to get anywhere, the worse it is for separatism (down with yankee imperialism).

Now you understand the reason for road closures in Colombo and the checkpoints. Only stupid people thought that they were intended keep people with guns and bombs out of Colombo. No one thinks that any more, not after Raviraj. The real purpose is to defeat separatism by making it impossible to go anywhere.

This is the wisdom of the Kandyan Kings that has been neglected for too long.

Once people stop going anywhere, all they can do is watch TV and listen to radio. The plan there is still being worked out (the kings didn’t have TV and radio, so the purohitas have to think this stuff up from scratch; it’s hard, especially when you’re not used to thinking).

But the planning is in progress; it will be explained in due course in a future column. First clue: Raja FM; second clue: Namal Rajapaksa, coming soon on Swarnavahini.

We will cut off all transport and communication with Jaffna to start with. Then, based on the spectacular success of this autochthonous solution to the terrorist, separatist, Western, salmon-eaters’ conspiratorial non-problem, we will enact new legislation to punish anyone who builds any new roads in any part of Sri Lanka by beheading.

And the airport? What airport? The whole thing in Weerawila was a diversion to confuse the foreigners. We’re not going to build any new airports; we’re going to close down Katunayake too. That way, they won’t notice our grand plan regarding the roads.

Weerawila is the place where the people who build roads will be beheaded.

I honestly can’t understand why four different presidents and untold numbers of army commanders and joint chiefs over twenty plus years didn’t get one decent highway to the North built; and why the fifth president is building an airport in Weerawila. Instead of saying they were stupid (I will be found guilty of the non-statutory offence of lese majesty by the Honorable Supreme Court if I say that), I came up with an alternative explanation.