There were marginal declines in both rupee and US dollar denominated loan stocks, data from the Central Bank showed.

Private credit was still up 4.4 percent in February from a year earlier, easing from 5.2 percent in January. 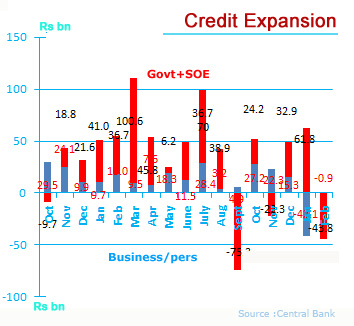 Following the 2008/2009 balance of payments crisis, private credit fell for eight months in a row.

Analysts says following a balance of payments crisis, which is triggered by a credit bubble, de-leveraging is a natural result as risky loans taken during the bubble period are purged and firms try to strengthen their balance sheets by reducing debt.