Aug 11 (LBO) – A top UK department store says it is expanding its selection of up market Ceylon Teas by introducing more custom made designer teas to tempt the palate of its customers. A soon to be introduced Harrods “Eagle Nest” tea is manually hand rolled to exacting specifications of the posh Knightsbridge department store.

“You will not get this tea anywhere else in Sri Lanka, India or any other part of the world,” says Hazifur Rahman Tea and Coffee consultant for Harrods.

“The leaves are plucked by an experienced plucker and hand rolled. This is time-consuming very difficult to produce, so you can only produce about 30 kilos a year.”

The limited edition designer tea will sell in packs of 100 grams at a price yet to be decided.

Rahman has been buying tea for Harrods for 30 years and has just retired to become a consultant.

The tea will be custom made by Sri Lanka’s Stassen’s Group, a diversified business group with roots in tea.

Harrods itself was established in 1849 by Charles Henry Harrods as a small grocery shop specializing in tea.

At present Harrods sells a range of specialist teas including unblended Ceylon Teas under their own “garden mark’, which is the individual brand of a tea estate. 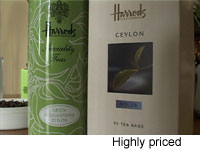 Unlike blended teas, where different types of tea is mixed to arrive at a standard taste, the tang of a garden mark can vary from one production batch to the next, with optimum being reached during the drier “quality season” of a given producing area.

The temperature and humidity of the day can affect the fermentation process of orthodox tea manufacture and cause subtle changes to the flavour from one day to the next challenging the skill of tea makers.

But Harrods buyers would not be found in Colombo’s busy tea auction or in any auction elsewhere in the world.

“To source the best tea, you have to go to the garden,” says Rahman. “You have to see the manufacturing process, you have to see its flavour, then you decide what to buy and how to buy. This is Harrods way of buying.”

One specialist tea that hit the shelves at Harrods that year was “Cocktail” tea, a blend of tips, the most expensive of teas made with the leaf bud.

Harrods paid 60 sterling pounds a kilo for the tea, in a year when the average export price of Sri Lankan tea was about 260 rupees, or 1.4 sterling pounds. 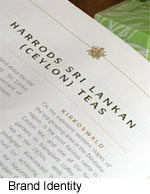 Harrods has been buying from Sri Lanka for the last 12 years, with its relationship firming with Stassens about five years ago, when it was buying only 25,000 kilos.

In 2006 Harrods expects to buy about 55,000 kilos from Sri Lanka, but the country lags India, which supplied 75,000 kilos last year with high profile Dajeelings and Assams stealing the show.

Sri Lanka however does not actively promote its top regional brands like Dimbula, and its own Ceylon Tea brand is also somewhat confused with Sri Lankan tea.

“Whether you go as Ceylon Tea or Sri Lanka tea, you have to choose one, and you have to vigorously promote that by spending some money on advertising,” Rahman says.