Dec 21, 2010 (LBO) – Warrant Officer N P S Pathirana carefully fixes the rotors of a model MI24 helicopter gunship. Once we go online next year everybody will have access to these models, Nanayakkara said. During the height of the war with the now defeated separatist Tamil Tigers, the Sri Lanka Air Force extensively used Russian built MI24 attack helicopters for combat air support.

Back then, Pathirana was attached to the 9th squadron of the Air Force as a maintenance technician. His duty was to make sure that the engines of the MI24 attack helicopters worked perfectly.

As the war escalated so did combat air missions against Tamil Tiger assets and defences.

Service personnel like Pathirana had to battle with time in challenging environments to make sure that the engines of the flying battle tanks were airworthy for each mission, adequate fuel was pumped and engine faults rectified.

Today, 19 months after the end of Sri Lanka’s war, Pathirana is engaged in a completely different task.
10lbodec21moth.jpg 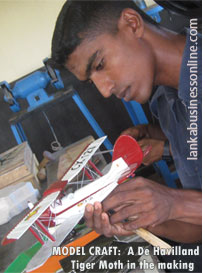