Mar 18, 2008 (LBO) – Sri Lanka’s capacity to counter and investigate bomb blasts has been boosted with new equipment from the United States, the island’s police chief said Tuesday. “We were waiting for this type of post blast investigation equipment,” Inspector General of Police Victor Perera said after receiving a stock of hi-tech equipment from the United States at its embassy in Colombo.

“We need well trained police inspectors in crime investigations and high tech equipment for the field of investigations,” Perera said. 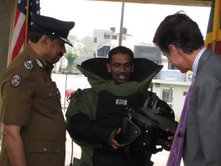 Sri Lanka has been hit by a series of parcel, roadside and suicide bomb attacks this year after fighting intensified between Tamil Tiger separatists and government forces.