Mar 30, 2013 (LBO) – Sri Lanka’s combined cycle power plants which are supposed to be efficient and cheaper have turned out to be more expensive than internal combustion plants, published data show. According to a consultation document released by the Public Utilities Commission, Sri Lanka’s power regulator, private plants running IC engines including Heladanavi and ACE Embilipitiya cost a little over 20 rupees to generate a unit of electricity.

The data was released ahead of a public consultation to be held on April 04.

But combined cycle plants including the West Coast Plant in Kerawalapitiya, AES Kelanitissa and CEB’s own plant in the Kelanitissa Complex cost, costs nearly 30 rupees or more per unit of electricity produced. 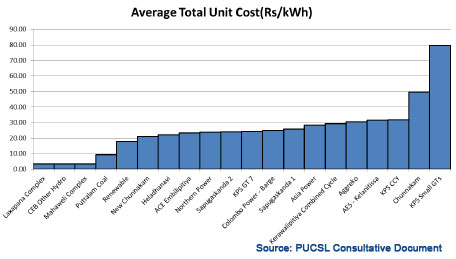 A combined cycle plant uses a gas turbine and the exhaust is used to produce steam, generating more power with the same fuel, which is expected to off-set the capital investment of additional equipment.

A private producer is paid by the grid operator, Ceylon Electricity Board, based on two crit