Mar 23, 2015 (LBO) – The Colombo Stock Exchange has signed an agreement with UK’s BTA Consulting to provide consultancy and project management services to set up a clearing house in Sri Lanka. 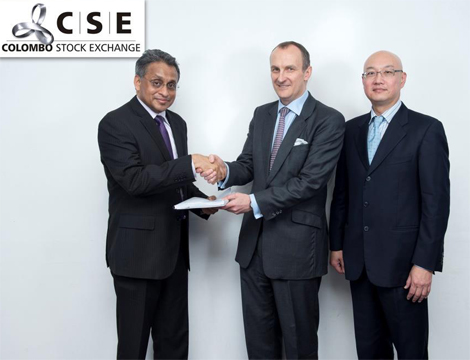 The full text of the CSE announcement is reproduced below.

CSE signs consultancy agreement with BTA Consulting, UK to set up a Clearing House to act as a Central Counterparty to guarantee settlement of Financial Markets transactions under a Delivery Vs. Payment system.

The Colombo Stock Exchange (CSE) signed an agreement with BTA Consulting (BTA) of the United Kingdom to provide Consultancy and Project Management services to set up a Clearing House which will act as a Central Counterparty (CCP) for settlement of securities, including shares, corporate debt, Government Securities and any other financial market instruments transacted in Sri Lanka.

This is a joint initiative between the Central Bank of Sri Lanka (CBSL), the Securities and Exchange Commission of Sri Lanka (SEC) and the Colombo Stock Exchange (CSE). The project was launched in January 2015. The Clearing House is expected to be set up within a two year period.

The CCP will also enable the CSE to move to a Delivery Vs. Payment (DVP) settlement system, thus significantly minimizing the risk of settlement failure and counterparty risk in the secondary market for shares.

Presently for equities the delivery of shares occur immediately upon the execution of the transaction while fund settlement takes place three (3) market days after the transaction date (T+3), thus exposing the seller to a three (3) day settlement risk, while for Government securities the process is bi-laterally agreed. Although some interim measures have been introduced to reduce settlement risk, the globally accepted mechanism for minimizing settlement risk is through a CCP-DVP system where the securities and funds are exchanged simultaneously, finally with full irrevocability on the settlement day.

BTA consulting is a UK based consultancy firm specializing in capital market related assignments globally having specialists with exposure to most capital markets including Bursa Malaysia, the Stock Exchange of Thailand, Wien Bourse (Vienna Stock Exchange), the Swiss Exchange and many other European, Middle Eastern and Asian markets. The consultants from BTA Consulting will work with a project team of specialists from CBSL, SEC and CSE.

A Working Group consisting of the Chief Operating Officer of the CSE, Director Capital Market Development of the SEC and the Superintendent Public Debt CBSL, will be responsible for the implementation of the project.

In preparation for the CCP, two preliminary phases have already been initiated by the CSE. In November 2014 the CSE launched a new generation Millennium Central Securities Depository (CSD) provided by the London Stock Exchange Group (LSEG) replacing the 19 year old legacy system which will be compatible with a DVP environment for securities settlement.

The second phase is the commissioning of new Broker Back Office (BBO) and Order Management Systems (OMS) for stock brokers. The OMS will contain a Risk Management System which will be a pre-requisite for the market to move to a CCP-DVP system. Stock Brokers are expected to select and enter into agreements with one of the four (4) shortlisted vendors offering such systems. It is expected that the systems will be in place within 2015.

The CCP will usher in a new era for securities trading in Sri Lanka said Mr. Vajira Kulatilaka, Chairman of the CSE adding that he believes that the introduction of the CCP with DVP will be a ‘game changer’ for our securities market as this was one of the key criteria for re-classification of our market as an emerging market.

The CEO of the CSE Mr. Rajeeva Bandaranaike appreciated the support extended by CBSL, SEC, Stock Brokers and Primary Dealers for supporting the measures that are being taken to mitigate the settlement risk in the securities market. He further stated that the CCP and DVP system of settlement will facilitate plans to diversify the CSE’s product range.