Apr 27, 2013 (LBO) – Sri Lanka has built a hotel management school in Kandy in the central hills more than doubling capacity to accommodate 500 students a year, the economic development ministry said. 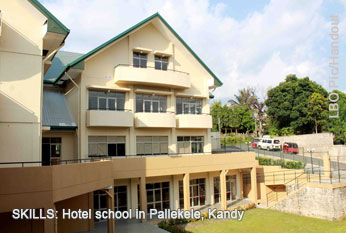 “The courses include training of chefs, training in restaurant services, guest relations, hotel room management and adapting Kandyan traditions and culture to the tourism industry,” the economic development ministry said.

“All the students gain practical experience at this institute since it also serves both local and foreign tourists as does a normal tourist hotel.” 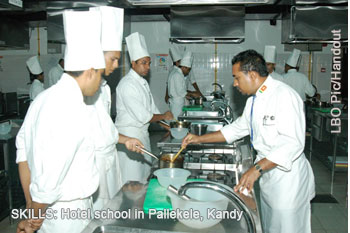 The ministry quoted principal Irandi Wijegunawardena as saying that the school also offers weekend and night courses for non-resident students.

The school was later shifted to separate rented premises to accommodate 200 students.

Economic development minister Basil Rajapaksa had initiated the hotel school which can accommodate 500 students a year. It will be opened on May 15.

Sri Lanka’s tourism industry has been growing after a war ended in 2009 needing well trained staff.