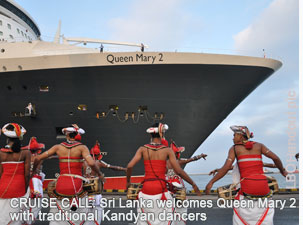 Sri Lanka’s Gemini Tours and Travels, which was in charge of local excursions, had taken the visitors to Kandy in Sri Lanka’s central hills, an elephant orphanage at Pinnawala.

Queen May 02 has 13 decks with swimming pools, theatre, gym, auditorium, restauratnts, a a casino, spa and 1,300 luxury cabins.

The vessel had set sail from the US on January and called at Cochin in India, before reaching Colombo. Its next port of call would be in Malaysia.

Sri Lanka welcomed a million tourists in 2012 and is expecting 1.2 million visitors this year.