Mar 29, 2013 (LBO) – A Muslim owned shop in a suburb of Sri Lanka’s capital was torched amid growing Buddhist nationalist attacks against minorities, while police said security has been tightened and they were searching for the perpetrators. “A special police team in investigating the incident,” police spokesman Buddhika Siriwardena said.

“We will bring the suspects to justice.” 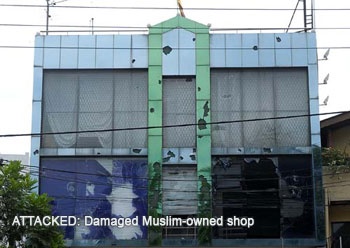 A store in Pepiliyana, belonging to a company that operates Fashion Bug, an apparel retail chain was attacked by a mob.

Nationalists who attacked mosques and churches have not been convicted in the recent past.

Sri Lanka has seen a spate of violence against Muslim and Christian places of worship by Buddhist nationalist groups which is spreading fear among minorities.

“It has created a fear psychosis among the Muslims,” N.M. Ameen, president of an umbrella organisation of Muslim groups was quoted as saying by AFP a news agency.

“We know a majority of the (Buddhist) people do not support this type of activity.”