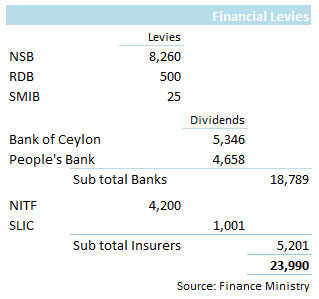 The Bank of Ceylon had paid 5.3 billion rupees in dividends and the People’s Bank 4,658 million. Sri Lanka Insurance Corporation had paid 1,001 million rupees, down from 1,750 million a year earlier.

State banks however are facing capital shortages, and need re-capitalization.

Both People’s Bank and Bank of Ceylon’s board are expected to pay some dividends on as conditions of bailouts received in the 1990s, but with strong balance sheet growth the banks need m