Sept 05, 2009 (LBO) – Sri Lanka’s navy commissioned 90 officers and an offshore patrol vessel last weekend as it continues to expand, having defeated the powerful Tamil Tiger naval wing. Senior defence officials said the navy’s future focus will be on protecting the island’s ocean resources and patrolling the surrounding seas to ensure terrorism, which was sustained by overseas supplies, does not recur.

Gotabhaya Rajapaksa, a former army officer who now heads the defence establishment, says there are indications Tamil rebels, defeated by government forces in May, are trying to revive their campaign for a separate state. 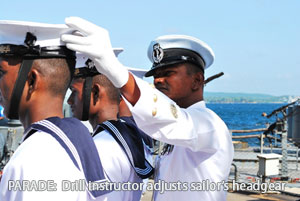 Rebel remnants who survived the military campaign and their supporters overseas still pose a threat, he said in a speech to navy troops at their main base in the eastern Trincomalee harbour.

“In future we must not allow them to raise their heads again. We must protect the gains of our victory over terrorism,” Rajapaksa said.

“Terrorists need to smuggle arms from abroad and train fighters overseas and infiltrate them into the island.”

Rajapaksa said the navy no