Feb 20, 2013 (LBO) – Simplify, a Colombo based aircraft operator said it planned to offer whale watching services using a newly delivered 5-seater amphibian aircraft it was managing for a third party. Simplify also has its own fleet. It operates operates a Bell Jet Ranger helicopter, a GA8 airvan, a Cessna 206 amphibian aircraft and says it will add a Bell 407 VIP helicopter soon. 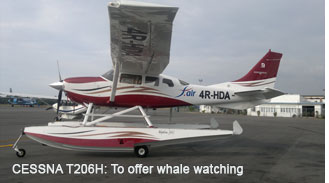 “Fairway has a bold new vision aimed at linking tourism and aviation in Sri Lanka,..” Suren Mirchandani, vice chairman of Simplifly said in a statement.

“.. [W]e will be working closely with them to develop a completely new business model for this aircraft for applications ranging from whale watching to excursion flights.”

Watching whales and dolphins from the air is popular in many countries. Sri Lanka is believed to be one of the easiest places to see blue and sperm whales.

“We will follow the marine shelf and have full access to a large area, compared to boats which can’t move fast,” Mirchandani said in a