June 12, 2013 (LBO) – Sri Lanka’s Cinnamon Air, a domestic carrier operating Cessna 208 amphibians said will begin scheduled flight to the South of the island and Kandy in the central hills from the end of June. Daily flights to Koggala and Dickwelle will be from Dandugama Oya waterdrome which is 10 minutes away from an international airport in Katunayake, north of Sri Lanka’s capital Colombo.

Later flights will originate from a domestic terminal which is still being built within the international airport. 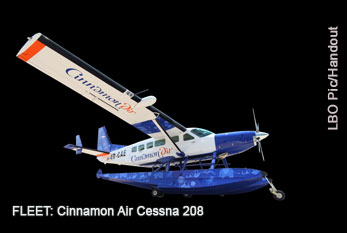 The daily flights to Koggala and Dickwella will serve key south coast tourist destinations such as Galle, Koggala, Weligama, Mirissa, Dickwella and Tangalle, the company said.

The firm said the route will allow passengers