June 04, 2013 (LBO) – Nilaveli Beach Hotel in Trincomalee in Sri Lanka’s Eastern coat said it had been recognized by Trip Advisor, a travel review site for two years running based on user responses. The Trip Advisor Certificate of Excellence is given only to the top 10 percent of businesses listed on the site, the hotel said. A hotel must maintain a rating of four out of possible five to qualify for the certificate.

“As the longest standing hotel in the East Coast, we are truly honoured to have been recognised by our customers through Trip Advisor once again” managing director Travice Ondaatjie said in a statement.

“..[S]ince reopening after the (2004) Tsunami in 2007, we have continued to improve our guest facilities and quality of service offered to our long standing loyal customers.”

The hotel which is marking 40 year next year is part of Sri Lanka’s Tangerine leisure group and was set up in 1974. 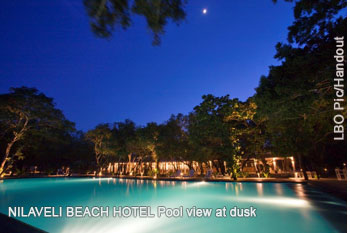