Jan 05, 2014 (LBO) – Sri Lanka’s Treasury Secretary PB Jayasundera said that he wishes President Mahinda Rajapaksa would be the president for 2020. 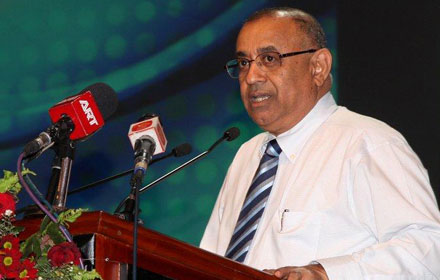 “I want to express my gratitude to His Excellency the President and wish he would be president for 2020 as well,” Jayasundera said.

Jayasundera was speaking at a Central Bank forum held last week to announce the Bank’s policy direction for the forthcoming period of 2015-2020.

President Rajapaksa contesting for a third term in January 08 this year. He is challenged by former health minister Maithripala Sirisena who defected to the opposition.

Sirisena vowed to abolish the 18th amendment and restore the 17th amendment to balance the power of the government and re-establish rule of law.

Jayasundera said he had seen many 100 day programs starting from 1970 that could not even be sustained for as many days.

He said at his age he was planning to write his memoirs and also about economics.

“Who knows I may get the Noble priz