June 10, 2008 (LBO) – Dubai-based Emirates is starting the first ever commercial Airbus A380 service to the Americas with a 14-hour non-stop flight to New York from August 01, the airline said. Air travellers will be able to experience Emirates Airline’s state-of-the-art A380 aircraft for the first time on 1st August, when the airline launches its first A380 commercial service from Dubai to New York JFK.

“The Americas represent a key focus area in Emirates’ route development plans, and we are delighted to be the first airline to launch commercial A380 services to the continent,” Emirates chairman Sheikh Ahmed bin Saeed Al-Maktoum said in a statement.

He said travellers will have extra space and capacity and a quality of experience “previously associated only with private jets”. 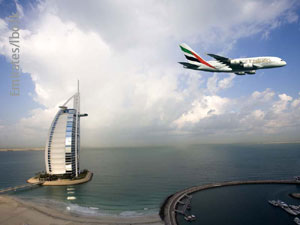 Emirates says its A380 interiors and onboard product, will be revealed when the airline receives its first A380 from Airbus’ Hamburg facility on July 28.

Emirates say the aircraft, powered by GP7200 engine made by General Electric and Pratt & Whitney give better fuel economy per passenger kilometre than most hybr