Feb 07, 2009 (LBO) – “I happen to be in love with dictators,” says Moses Isegawa, a Ugandan author whose life had been shaped by the likes of former dictator Idi Amin, and who eventually left his home country to write from abroad. “Every word is a vote,” insists Anam.

V V Ganeshanthan, whose debut novel Love Marriage was published only last year and lives in the US, wonders whether someone resident outside can really represent what the people inside a country experiences.

For Sri Lankans in the audience, the debate seemed to strike a chord. It was only weeks earlier that Lasantha Wickrematunga, editor of The Sunday Leader newspaper was killed by armed gunmen in broad daylight.

Another editor was assaulted within days, together with his wife. A dozen journalists and media workers have been killed in recent years, and nobody has been convicted.

Media rights bodies have named Sri Lanka as one of the most dangerous places in the world for journalists, after Iraq.

But The Galle Literary Festival, now in its third year, seems to take place in a parallel universe. 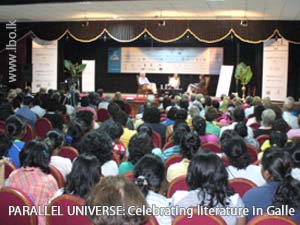 It is a place for book lovers to see and meet