Dec 23, 2008 (LBO) – Thousands of anxious customers of Sri Lanka’s Golden Key Credit Card Company flocked to a conference hall in Colombo to meet Ceylinco group chairman Lalith Kotelawala, and get information on the status of their funds. Golden Key asked customers to come to the BMICH conference hall in Sri Lanka’s capital Colombo Tuesday, to meet group chairman Lalith Kotelawala, after he said the firm had been mis-managed and the its chief executive, Khavan Perera, had resigned.

The company had arranged seating for a few hundred customers at a meeting room, but thousands of customers poured into the conference hall premises, spilling on to the lawns, and causing a traffic jam on the approach road. 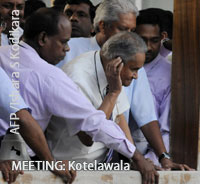 Customers who were inside the meeting room said they were told that interest on their money would be paid for January, and the firm would be audited and payments would be re-structured.

A visibly shaken Kotelawala later emerged to address those outside. Speaking in Sinhala, he promised to ensure that interest and payments would be made. He was escorted by security personnel as customers thronged around him.

Many hundreds of customers however,