LOS ANGELES, May 31, 2008 (AFP) – Oscar-winning US actress Holly Hunter got star treatment Friday, as her name was embedded and her film career honored on Hollywood’s “Walk of Fame.” The 50-year-old actress, her two-year-old twin sons, director Steven Spielberg and actor Ed Harris were all on hand for the unveiling of the 2,363rd star to be laid on Hollywood Boulevard. 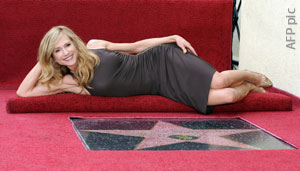 Hunter won a Best Actress Oscar for her starring role in Jane Campion’s “The Piano” (1993) about the mute bride of a landowner in 1850’s New Zealand.