Oct 24, 2009 (LBO) – Uthum Herat, the deputy governor of Sri Lanka’s central bank, a deeply respected and much-loved official who has served the country for 27 years had passed away, the Central Bank said. Herat, 51 had passed away on October 23, at a private hospital in Colombo.

The full Central Bank statement is reproduced below.

The Central Bank, with deep sorrow, wishes to announce the demise of Dr. Uthum Herat, the Deputy Governor of the Central Bank of Sri Lanka, today 23rd, October, 2009 at a private hospital in Colombo, Sri Lanka. 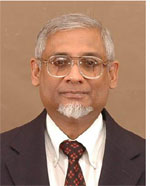 Dr. P W R B A U Herat (52) has been in the Central Bank for 27 years. Before appointed as the Deputy Governor, he has served in the Statistics Department, Economic Research Department and as an Assistant Governor in charge of Bank Supervision, Supervision of Non-Bank Financial Institution Department, Financial Stability Departments and several operational departments. He has worked mostly in areas of financial systems and price stability of the Central Bank.

Dr Herat was on release to IMF to serve as the Alternate Executive Director for Bangladesh, Bhutan, India and Sri Lan