Nov 04, 2009 (LBO) – A group of graduates were water cannoned at tear gassed by police when they tried to march up to office of Sri Lanka’s president Mahinda Rajapaksa Wednesday as part of a protest demanding state jobs. Sri Lanka’s graduates educated at tax payer expense free in state universities have spread a successful idea among the people that the society owes them a life after giving a degree free of charge.

In 2004 a government came into power promising free jobs to graduates who cannot find jobs in productive sectors and helped bloat an already expensive government.

Some of the graduates are partly backed by the Marxist Janatha Vimukthi Peramuna.

Degree awarding is a state monopoly and activist graduates have resisted reforms in tertiary education or the creation of private degree awarding institutes.

The graduates had been fasting in front of the main railway station in Sri Lanka’s capital Colombo before starting the protest March. 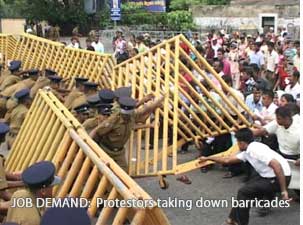 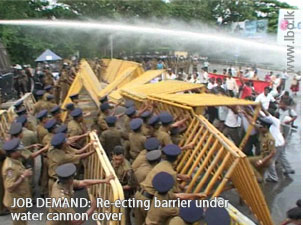