May 25, 2008 (LBO) – The world’s major ‘reserve currency’ central banks should stop money printing to end a monetary shock that is firing a global commodity bubble and food riots in poor countries, a new International Monetary Fund study has said. The money issued by major central banks such as the Federal Reserve and the Bank of England labeled (some say laughably) as ‘hard’ became reserve currencies for the monetary authorities of other countries, which ran ‘pegged’ systems.

Inflation continued to be high in the 1970s as reserve currency central banks struggled to conduct monetary policy without a gold standard. 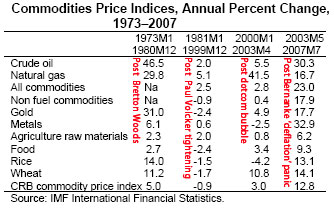 Around 1980 reserve currency central banks led by Paul Volcker’s Fed went into strict monetary targeting bringing inflation and commodity prices (and gold) down to earth. This drove the US and parts of the world into a recession.