Oct 10, 2009 (LBO) – The Indian and Sri Lankan navies held a three-day joint exercise in the seas off Colombo earlier this week to train officer cadets and practice manoeuvres for maritime security operations. The manoeuvres included flights by an Indian navy light helicopter which dropped supplies on two Sri Lankan navy patrol vessels to provide training for the island’s navy which has announced plans for a naval air wing in future. 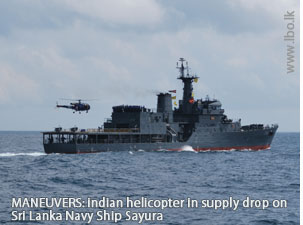 Taking part in the exercise were the Indian navy’s Shardul landing ship and the coast guard vessel Varuna along with the Sri Lankan navy’s Sayura and Samudura offshore patrol vessels.

Three Sri Lankan navy fast attack craft provided an escort at a discreet distance, their presence only detectable by the sunlight glinting off a porthole and the white specs of foam thrown up by the bow wave.

The sea was unusually calm for this time of year when the monsoon is still active with the water only slightly choppy.