Aug 19, 2008 (LBO) – Dubai-based Emirates said two of its pilots from Sri Lanka were among the first to fly the new Airbus A380 super jumbo aircraft. Suren Ratwatte has flown the prototype aircraft registered as F-WWDD out of Airbus Industries home airfield in Toulouse France on June 18, while Suhail Hashim flew the same aircraft the following day. 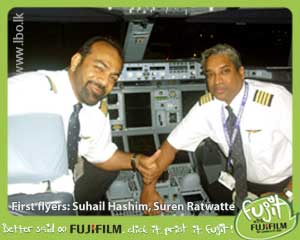 The pilots had joined Emirates in 1989.

“The A380 is the world’s largest commercial aircraft, and Suren’s and Suhail’s achievement is a tribute to the abilities of our pilots,” Chandana de Silva, Emirates area manager for Sri Lanka and Maldives said in a statement.

The two pilots were part of the first batch of Emirates crew to qualify to fly the aircraft, now being operated by Emirates between Dubai and New York.

Emirates says the aircraft’s floor area is 49 percent bigger and has 35 percent more seats that the largest existing airliner. The A380 is 79 feet, 7 inches high with a wing span of 261 feet, 8 inches.

Emirates A380s have a range of up to 9,320 miles and offer better fuel economy per passenger