May 25, 2010 (AFP) – Hundreds of protesters took to the streets in the capital Colombo Tuesday demanding Sri Lanka’s government abandon a proposed trade pact with neighbouring India. President Mahinda Rajapakse met the demonstrators at his tightly-guarded Temple Trees residence in Colombo and vowed he would not enter any pact that was harmful to the island’s economic interests.

“Professionals, including doctors and engineers, came to Temple Trees and protested against the CEPA with India,” the president’s office said, referring to the proposed Comprehensive Economic Partnership Agreement. 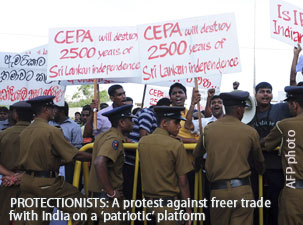 It said the president, who is also the finance minister, assured them that he would not go ahead with “any pact or agreement” that was not in the best interest of the island.

“The government will not enter into any pact or agreement that is inimical to its people and economic interests,” the statement said. The protests came two weeks ahead of a proposed visit by Rajapakse to India.