July 10, 2008 (LBO) – A one day token strike called by Sri Lanka’s opposition parties got off to a peaceful start with slightly reduced traffic in the capital Colombo and most public services operating as usual, officials and residents said. Sri Lanka’s state-run railways system’s chief Lalithasiri Gunaruwan said train services were operating normally but logs were placed across the track near Beruwala in the South of the island.

Black oil had been thrown against two trains in Polgahawela in the north central area, he said. 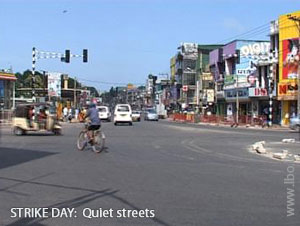 A senior port official and shipping line representatives said work at the Colombo port was progressing as on other days. The duty officer of the main international airport in Katunayake said flights were operating normally.

Colombo’s hospital chief Hector Weerasinghe said patients were being admitted and services were being provided without disruption.

The main organizers of the strike, the Marxist-nationalist Janatha Vimukthi Peramuna (JVP), a former ally of the ruling coalition, said the token strike was progressing satisfactorily and a series of demonstrations would be held around the capital.

The JVP said at least