June 25, 2010 Arugam Bay, SRI LANKA (LBO) – Top professional surfers from around the world were at Sri Lanka’s Arugam Bay, a small village in the eastern coast of the island which was limited to an adventurous few until now. “But probably not as good as in Indonesia.”

He says right breaking waves breaking so close to the shore allow surfers to run along to the shore and try more waves instead of swimming laboriously against the wave to get to the starting point. 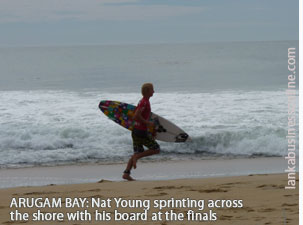 “The waves are very consistent here,” adds Wade. “So you can be sure to get the waves when you come.”

SriLankan Airlines, the island’s national carrier, who was the main sponsor of the championship, wants to make the Arugam Bay event a permanent fixture on the ASP World Tour circuit.

“We first negotiated with them in 2004, but the war broke out and we shifted to the Maldives, because of the security situation,” says SriLankan Airlines chief Manoj Gunewardena.