January 11, 2007 (LBO) – Scouting treetops for purple-faced leaf monkeys or on the trail of the shy loris at nightfall, Sri Lanka’s rich primate life could become a draw card for foreign travellers with a taste for the wild. The tiny island off the tip of India is home to at least five species of monkeys the Hanuman Langur with its special roots in Indian mythology, the endemic purple-faced leaf monkey and the toques to the shy nocturnal Loris.

The island has no big apes like the mountain gorilla’s that have made Africa famous, the orangutans of Borneo or close relatives to people the chimpanzees, but is rich in several endemic races of monkeys.

Primates have always captured the imagination of people. The question is, can monkeys help sell Sri Lanka? The answer is yes, Gehan de Silva Wijeyeratne CEO of Jetwing eco-holidays told LBO, while on the trail of a Hanuman Langur in the island’s ancient kingdom of Sigiriya.

Sri Lanka shares the grey or ‘Hanuman’ langur with India a graceful animal with long limbs, a pale greyish brown coat, a dark face and long eyelashes to protect it from the glare while feeding on treetops. 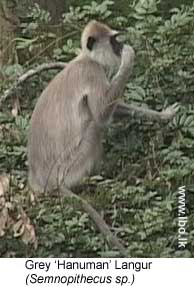