July 6, 2009, ARUGAM BAY (LBO) – Arugam Bay in eastern Sri Lanka is coming to life after the end of a 30-year war in Sri Lanka cleared the way for surfers from around the world to ride its waves again. Hotels in the area were packed to capacity this week when surfers flocked to the town to take part in a contest dubbed ‘Champion of Champions’. 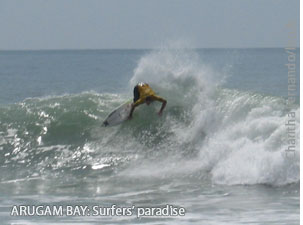 “We chose Arugam Bay because its one of the best waves in the world.”

Pro Surf had last toured Sri Lanka in 2003 during a cease-fire with the Tamil Tiger rebels. In May 2009 the organization was crushed by the military and its leadership wiped out. “Unfortunately because of the civil conflict we didn’t come back within the last four years,” says Reed.

“We are back again and we want to make it an annual event.” 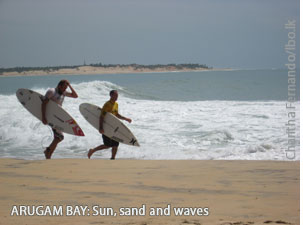 Arugam Bay also known as ‘A Bay’ in surfing circles is renowned as one of the best surfing destinations in the world.