Sept 10, 2009 (LBO) – At Sigiriya, in central Sri Lanka, a group of geophysicists are probing the ground around an ancient rock fortress with ground penetrating radar, looking for man-made structures which are 1,500 years old. The rock is surrounded by a landscaped patchwork of shallow ponds – a water garden – which is irrigated by a complex network of waterways and trimmed with fountains. 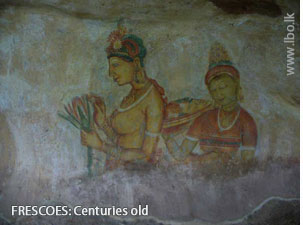 Ancient Sri Lankans who built large reservoirs – called tanks – are known for their feats of irrigation engineering, which were vital for their agriculture based civilization.

The enraged and fratricidal Kasyapa is said to have walled his father into the bund of Kala Wewa, a large reservoir after finding out that most of the funds of the royal treasury had been committed to building the tank.

Only a part of the structure on the grounds around the citadel in Sigiriya (Lion Rock) have been explored and restored.

In a plateau like landing halfway up the rock, the giant paws of a lion carved from the rock, still remain.